Adalynn M. Hughes was born June 25, 2003, to Danette and Brian Hughes. Twelve hours after Adalynn was born, we observed abnormal movement in Adalynn’s arms and legs. They were jerking in a rhythmic motion. Nursing staff and her Pediatrician determined she was suffering from seizures, and was immediately transferred to the Neonatal Intensive Care unit at Children’s Hospital. Three days later, an MRI indicated Adalynn had suffered a stroke, most likely occurring prior to her birth (in-utero). Over the next year, Adalynn was introduced to UCP United Cerebral Palsy Central California – Hanford Chapter. From three months of age until she was five years old, she was put through daily intensive physical therapy that was specially designed for her. It included fine and gross motor exercises, mobility, ambulation skills, endurance and coordination, reduction of body tension, relaxation techniques, range of motion, sensory stimulation, etc. This was a very challenging time for us. Every day was a new beginning to see what she could accomplish and what she was capable of handling with her disabilities.

Over the years, we have seen many doctors and specialists to get all the help needed for her multiple diagnoses: absence seizures, focal seizures, partial blindness in both eyes (Hemianopia), Pervasive Development Disorder, severe behavioral issues, gastrointestinal issues, and more. During this period, Adalynn experienced a loss of speech for about a two year span beginning in 2006.

In 2007, Adalynn began receiving Therapeutic Horseback Riding through Happy Trails. This is where Adalynn began to regain many of the abilities she had lost in years prior due to some other health issues. We had no idea of the fundamental impact that Happy Trails would have on Adalynn’s speech, growth, physical capabilities, and endurance to riding an animal five times her size. Her speech and physical capabilities improved over the years at it was very apparent that Happy Trails was the real trigger in helping her manage her disability in a better way. She has such a love for her favorite horse, “Frankie”. Her ability to express how excited she is when we are driving into the Happy Trails Ranch is unbelievable. More than words can express. Adalynn has been truly blessed in having the fantastic staff/volunteers and Happy Trails who dedicate their time to assisting our children of the Central Valley. Without our family having this therapeutic option for Adalynn, she wouldn’t be progressing in such a positive direction.

As time has displayed to Brian and I she is a happy, strong, enthusiastic and full of energy growing 8 year girl who loves being a client of Happy Trails. 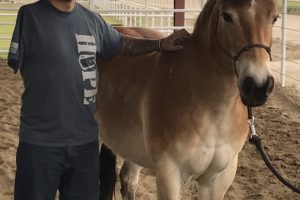 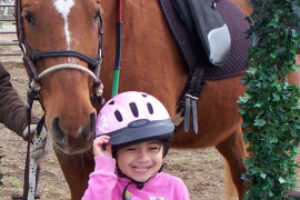 Sienna Villa can often be found “galloping” around the house[...] 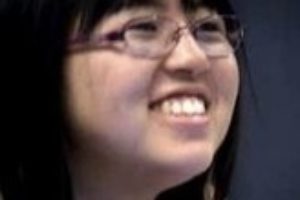 Kayla has been riding and vaulting at Happy Trails for[...]