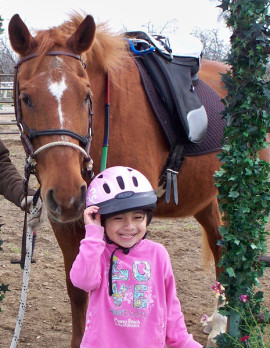 Sienna Villa can often be found “galloping” around the house and turning various objects into horses – her favorite animal. She is a friendly and happy six-year old little girl that also loves spending time with friends, playing with her dog, going to the park, dancing, and making new friends. She is confident and extremely social. In fact, most people would never even know that Sienna also suffers from an undiagnosed condition that has left her with underdeveloped muscles, delayed cognitive ability, and an inability to speak.

Sienna was born in July of 2006 to parents Joey Villa and Rosalina Silva. Initially, she seemed like any other happy, healthy, baby girl. However, when she was 10 months old, both of her grandmothers (who had raised many children between them) noticed that Sienna wasn’t rolling over, crawling, babbling, scooting, or anything else that seemed appropriate for her age. This discovery sent Sienna on a journey to Children’s Hospital Central California where doctors ran an array of tests but came up with no answers.

Although doctors could not determine a specific diagnosis for Sienna, it was determined that she had very low muscle tone, among other things, and they recommended that she start physical and occupational therapy. Thanks to her therapy, Sienna began crawling when she was around a year and a half and started walking when she was two. However, Sienna continued to struggle with her muscle tone and posture, spent much of the time in a hunched-over position, and had yet to utter a single word. When she was two and a half, Sienna had her first noticeable seizure and more tests began.

When she was three, Sienna was referred to Happy Trails Riding Academy by her doctors and therapists. Sienna had always had a deep love of animals and her parents thought that therapeutic riding would help Sienna with her muscle tone and balance, plus it would give her another way to socialize. In the beginning, Sienna was very distracted by her parents’ presence during her riding lessons, struggled to focus on instructions, needed much assistance from her side-walkers to help her stay upright in the saddle, and needed shorter lessons for her stamina. But, Sienna loved every single minute of being on that horse.

After nearly three years at Happy Trails, Sienna’s posture and balance are vastly improved, her attention span has increased, and she participates in the full hour-long lessons not just once, but twice per week. “She has made great strides with communication and following instructions in the past two years. This is demonstrated by her increased use of signs during class and participation with activities. She has a personality that wins the hearts of the volunteers and horses alike,” said Klara Bergtholdt, Occupational Therapist and one of Sienna’s instructors at Happy Trails.

Children’s Hospital has tested Sienna for genetic and other disorders more than five times and her family is not any closer to getting answers. The closest guess is that she is in the high-functioning autism spectrum combined with a seizure disorder. Despite her limitations, Sienna continues to be a positive, friendly, happy, and lovable little girl that brings joy to everyone she meets. She is always ready with a hug for her instructors and volunteers and loves to wave “hello” to the horses as her family drives up the driveway. 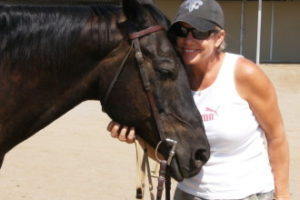 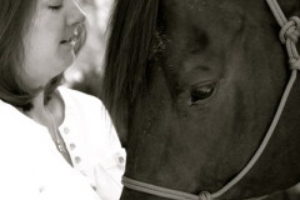 Amanda has been a consistent participant in the Happy Trails[...] 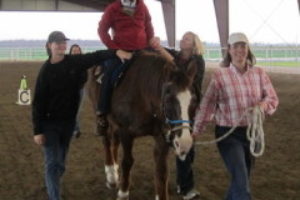